Fluorocarbon, when it was first released to the angling community several years ago it suffered from many issues namely that it was brittle and super stiff. The brittleness was resolved but the stiffness remained. Recently Fox released their new product, Illusion soft fluorocarbon and i am pleased to say that stiffness in fluorocarbon hook links is a thing of the past. The hook link is softer and more supple and like all fluorocarbons is practically invisible in water as it is a refractive index close to that of water. Some anglers mistakenly fish with red coloured lines believing that as red is the first colour to disappear the deeper you go that their red lines are therefore “invisible”, the anglers who know a thing or two use fluorocarbon as it truly is invisible.

So what other properties make this a superb hook link, well the slight stiffness ( note it is not as supple as the softest mono)  is very useful at preventing tangles especially if there a nuisance fish such as Poisson chat or bream about. There is no use casting in a well made “Big Pig Rig” or a blow back rig made in supple braid if with in 5 mins the attentions of nuisance fish have completely tangled the hair and destroyed hooking properties the rig. This was a massive issue in France a while back when we attempted to fish a lake that was boiling with big black shoals of Poisson chat. The slight stiffness means that when the smaller species have finished playing about with the bait, the rig generally pops back into shape ready for mr carp. Another useful property is that of is abrasion resistance, compared to mono of the same breaking strain the Fox fluorocarbon is fairly thick which is no bad thing in my humble opinion as it will only add to fluorocarbons already impressive abrasion resistance as well as protecting the carp from cuts that can be caused by super thin mono or super fine braid. Additionally it is worth noting that fluorocarbon naturally sinks meaning that you do not have to use tungsten putty on your hook link to keep it pinned to the bottom.

Rig wise, hook selection is critical when using fluorocarbon, a lot of anglers make a very critical mistake. Embarrassingly I also made the same mistake in the past and it cost me fish, it was only an impromptu rig clinic on the bank with a fellow angler that pointed out the error of my ways 🙂 Allow me to explain : one of my favourite hooks is the Fox SSSP or SSBP both are similar hooks with one having a “beaked” or in-turned point. However both have one feature that makes them unsuitable for using with fluorocarbon hook links ( but very suitable for braid hook links) which is the in-turned eye. This is where the Fox SR hook come into its own. If we compare a SSSP and an SR hook :

You will instantly notice the left hand hook has an in-turned eye. This is exactly what you are looking for if you are fishing with braid such as Fox Coretex however not what you are looking for when using a slightly stiffer material such as fluorocarbon. Indeed, if we look at a link that has been made with fluorocarbon and an Armapoint SSSP hook : 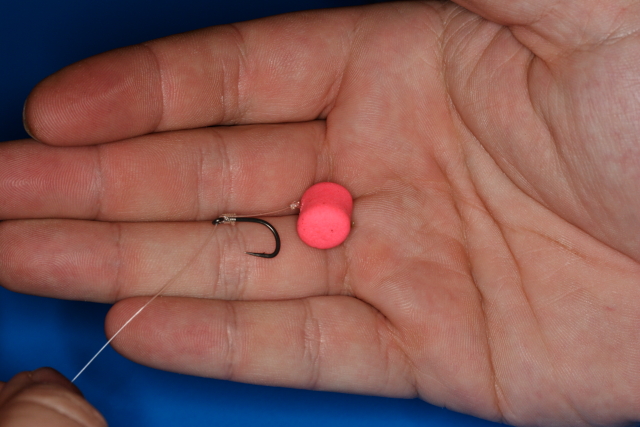 The first think you notice is the rather extreme hooking angle. The in-turned eye produces too sharp an angle as it exits through the down turned eye which whilst will hook fish will often hook them too far forwards in the lips meaning that you can loose your hook-hold during a prolonged fight. I once lost the only chance that I had in a week long session due to this and to say it was frustrating was an understatement.

If we look at the hooking angle that an Armapoint SR hook gives with the same breaking strain fluorocarbon you will see a marked difference: 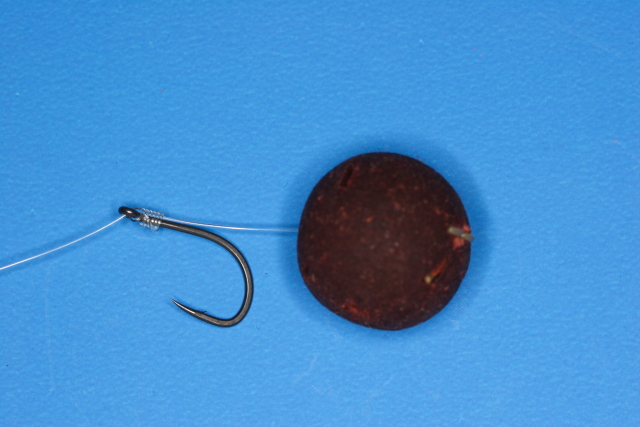 Notice the aggressive but not too aggressive exit angle of the fluorocarbon from the hook ? well that is due to the Armapoint SR having a slightly out turned eye, not as out turned as a a dedicated “Chod rig” hook but out turned none the less and this makes them perfect for bottom bait setups. This makes the hooking angle absolutely perfect and not a piece of shrink tube in sight. To complete the rig all you need is a simple figure of 8 knot in the other end of the line and you are done, yes fluorocarbon links are really that simple, just a hook and some fluorocarbon and you are set. Combine with the new Fox lead clips and you have a simple, effective setup.

Overall, I will make no secret of the fact that I really like fluorocarbon hook links, I have caught a lot of big fish on them and if your water is loaded with nuisance species, and you don’t like to recast every 30 mins this is the hook link for you. Fox have brought the best of both worlds in that their new product is fairly limp ( but not too limp) and is memory free with a quick tug between tension bars. 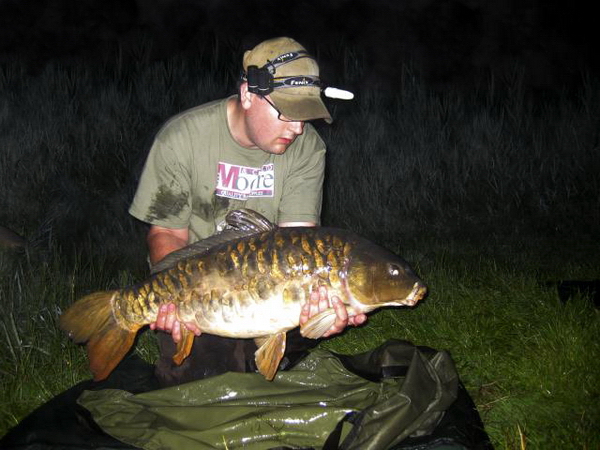 24lb+ almost fully scaled mirror carp caught at close range from a water loaded with bream on a fluorocarbon hook link, part of a multi fish haul made possible by this material.

One thought on “Flurocarbon rigs – the ultimate in simplicity”