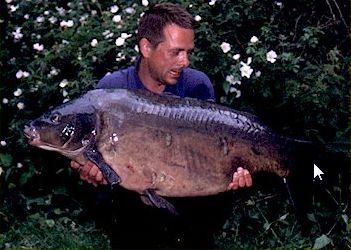 Reports are coming in that “the Black Mirror” from Colnemere near Heathrow is dead, not only is one of the prettiest carp ever to grace the bank dead but also the hardest to catch given that she now lives in an SSSI with no fishing rights. The carp has not been a frequent visitor to the bank and after Jason Hayward caught it in 1992 the lake has been more heavily protected as it has now been further protected and made an SPA, ie fishing the mere for the last few years has been illegal ( adding to the cachet to some to capturing the fish) In the words of Jason Heyward the 1st person to catch the fish ( and legally please note)

For the sake of clarity, the mere is an SSSI, [along with a number of other nearby waters] But that does not stop the fishing.
When a water is given an SSSI status, any activity’s that were already being conducted on there are allowed to carry on, BUT the mere has been given the further classification of a S.P.A. [special protection area] and furthermore, a status of a RAMSAR site, which means it is not just of national importance, but of INTERNATIONAL importance, this means that any activity that may damage the site, has to cease immediately.
[The status was given due to the area supporting over 2% of the entire Gadwall and Shoveler of North west and central Europe.

Why do I list all of this ? well if the reports be believed it is not just the Black Mirror that has dies but all the fish life in the lake meaning that it is most probably a serious ecological disaster. Tn the words of one person who has spoken to someone who found the fish

Everything is dead. Eels, bream, tench, pike, all the carp, the whole lake is dead.

A sad day indeed.. and one that points to either an algal bloom or poisoning. If you are walking about in the country side and you see an issue in a lake, either large numbers of fish in distress or dead fish call the EA on 0800 80 70 60

Will update as I have more news, this comes on the back of the death of TwoTone who passed away last week and whose memorial was at 11am today.

“I was there earlier, got there soon as i heard. EVERYTHING is dead. pike, tench, bream,carp, fry, even eels. It all died literally overnight.”

so there you have it, the whole lake seems to have gone even the water snails. Over time I suspect that we will find out what caused the issue, be it a bloom, chemical spill or what ever but one thing is certain that we will never bring back the black mirror.