In what is not really the shock of the century “scar” from Les Graviers has come back out, matching the previous record from Rainbow lake by Martin Locke, the Solar head honcho. Strangely it is the Daily Mail who has reported on it again rather than the forums or the angling media.

Paul Roberts from Dorset caught scar at  94lbs down from the previous capture of the same fish  by Ambrose Smith at 99lbs ( Martin Lockes Rainbow fish was 94lb’s  ) from Les Graviers in Dijon in France a few weeks ago. The night before his friend Richard Middleton also caught the famous “Brown fish ” from the same lake at 83lbs a feat in its self, then eclipsed the next night when Paul Roberts caught scar at 6lb’s below its current record weight.

My congratulations go to Paul for the capture of this fish but I cant help but think that if it comes to the bank too regularly it will be like Benson, then again I haven’t had a carp in the 90lb bracket so it could just be the green eyed monster speaking 🙂

By the way if you have caught something notable and want to publicise it, drop me a mail and I will see if I can do a catch report here. I am just waiting for confirmation from a friend but I may have a picture of a 5lb perch to be able to put up soon and that is a real achievement.

The fish was taken in the summer of 1994 when I was just 17, a session has been arranged in a lake close to where my parents had a house in France in the region. I had arranged to go for a weeks carp fishing with a mate of mine and we traveled down to France with my parents full of anticipation. Bait was rolled before we left the UK and we had 20 KG’s of chick peas with us ( my favourite bait at the time).

Anyway to cut a long story short the weeks fishing was cut down to a few days when my mate had to return back to the UK for personal reasons leaving me fishing alone. I was happy to do this but my parents ( remember this was in the age before mobile phones) were not so 2 x 2 day sessions it had to be.

The fishing was not easy, we expected the fish to come crawling up the line. Well the poisson chat did…. and even swapping to chick pea on the hair didn’t stop them.  The weed was amazing, massive clumps of elodea that seemed to float around to catch you out.

On the last day I received a violent take, far far more violent then I had ever experienced before. The fight was ( from memory) a normal enough fight with the fish kiting right and left, however the fun really started when I got it in the net. The fish was brought to the waiting spreader block a little too early it seemed and once it was in ( and I was celebrating) the fish started to thrash wildly. Really wildly, so much in fact that it managed to rip a hole in the side of the net and swim out. Imagine the scene I am now trying to play a fish whilst the line is running through a massive hole in the net and disappearing into the depths.

Swiftly I realised that the fish had made its way straight into a large bunch of weed and was stuck firm ( no doubt trying to throw the hook) so there was nothing for us but to jump into the water after it. I should point out at this stage that I had no idea how deep the water was in front of me, the drop to the water was 1m and the water could have been 3m deep, as it was it the water came up to my neck but I was able to swim with the net over to the weed ball and haul the whole damn lot into the net. I then swiftly turned and doggy paddled as fast as I could back to the bank.

There was then the frantic search through the weed for the fish and in seconds I realised that I had caught my largest carp ever.

After weighing it several times I settled on a weight of 20lb 2oz and at the time it smashed my previous PB by 3-4 lbs. The fish was not the normal “swimming gut” that you occasionally find but appeared to be a river carp that was just pure muscle. Magic fishing and a memory I will treasure for ever. 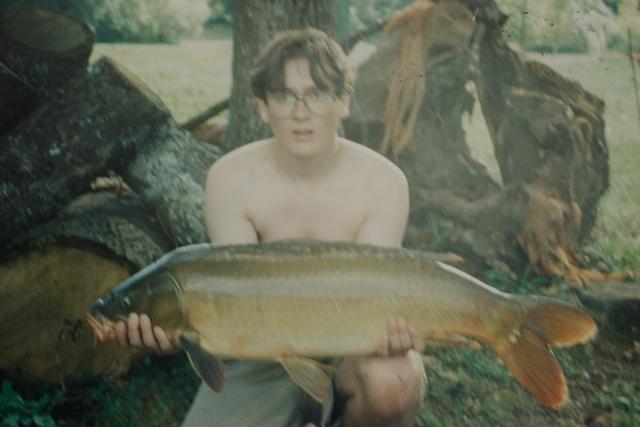 Picture quality is really bad due to the camera that was used, I have progressed a lot in the last 16 years

Just back from a superb trip to France arranged by Ron from the fishing ship in Uithorne, tired but very happy would be by comment. Went with some of the best, funniest people I have ever met. They really tried to make me feel welcome and a great time was had by all. Final tally for me was 21 carp, 2 bream and a pike and many roach and rudd ( err yes 🙂 )

Any way crowning achievement for my was a new PB of 39lb’s ( UK lbs in case anyone thinks I have gone native with Dutch pounds) which was sadly taken at night ( as were 99% of all of my fish) so you can’t really see the full glory of the shots. Fish was taken on the ever reliable CCmoore Meteor tipped with a strawberry hell raiser dumbbell popup. I will post a full blog article later but for now here is the pic 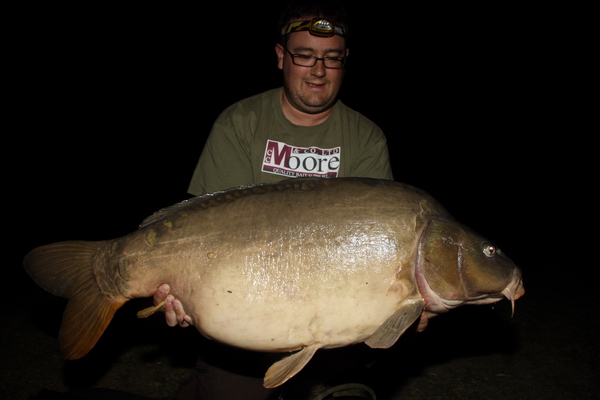 Well it is almost time to be off to France, after last year at Abbey Lakes we decided to go a little further for this year. Eventually we chose Etang Gallet from Boysaway Carping. Apart from distance from Amsterdam ( it is a little far) it fits all the criteria we had. Another plus is that we probably will be the only anglers on the complex which means easy swim moves.  Another thing it has going for it is Zander and Black bass, I have never caught a Zander and Micks doesnt count :o) so this will be an experience for both of us and I am looking forwards to that style of fishing almost as much as the carp.

Anyway we are off in the next day or so and apart from some blogging from the bivvi ( there is wlan access) it will be silent for a while.